Foreign Minister Dr. AK Abdul Momen joined the dialogue virtually from Washington DC as the chief guest on September 30, according to a press release received here from the London mission.

Bangladesh High Commissioner to the UK Saida Muna Tasneem made a presentation on the Mujib Climate Prosperity Decade Plan 2021-2030, announced by Prime Minister Sheikh Hasina at the CVF Leaders' Summit on 7 October 2020 under Bangladesh's CVF Presidency during the Mujib Year.

Foreign Minister Dr Momen said as CVF chair, Bangladesh will amplify the voices of the most vulnerable countries at the COP26 at the CVF-COP26 Leaders' Summit on the sidelines of COP26 and forge an ambitious Dhaka-Glasgow CVF-COP26 Climate Declaration.

"A Climate Emergency Pact should also be established between the UK's COP26 presidency and CVF members in Glasgow to effectively support those nations most in need," he added. 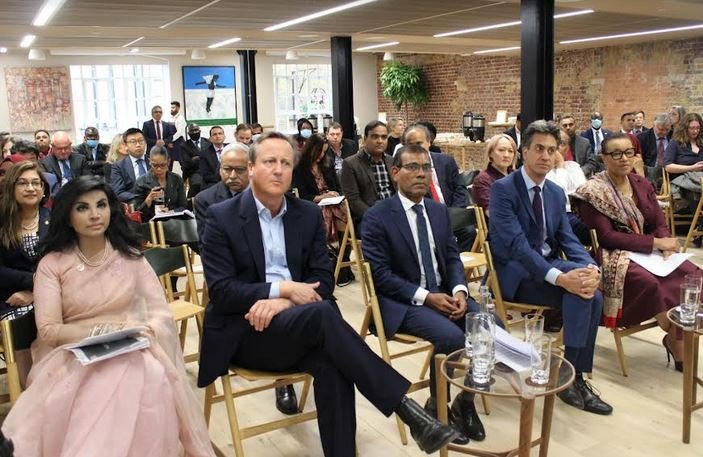 Dr Momen commended Prime Minister Boris Johnson for UK's proactive leadership as COP26 host in Glasgow next month and called for closing the major emission and financing gaps at COP26 for capping temperatures at 1.5 degrees.

David Cameron in his speech said, Bangladesh as the CVF Presidency should make a powerful statement at the COP26 to ensure that world leaders take heed of the extreme climatic vulnerabilities of the 48 CVF countries contributing less than 5 percent of global emissions. Recalling his visit to Bangladesh in 2017, he praised Prime Minister Sheikh Hasina's leadership, paying tribute to the country's economic progress and development.

Maldives former President Mohamed Nasheed came with the strong opinion that climate vulnerable countries should be provided with fresh financing under the loss and damage initiative in order to avoid falling into debt due to climate-related loss and the impact of Covid on the economy.

He suggested decolonizing climate dialogue to give all parties a fair chance. Saida Muna Tasneem said, "The Mujib plan is an ambitious road map of actions being taken by the CVF President Prime Minister Sheikh Hasina to promote the concept of climate prosperity by making strategic investments in building resilience and a low-carbon sustainable and prosperous development pathway."

The high commissioner hoped that at the COP26 many more CVF countries would come up with climate prosperity plans which need sustained green financing from richer countries.

The dialogue was attended by CVF high commissioners, ambassadors and climate experts.