Fuel Price Soared Up Due to Global Crisis: Hasan 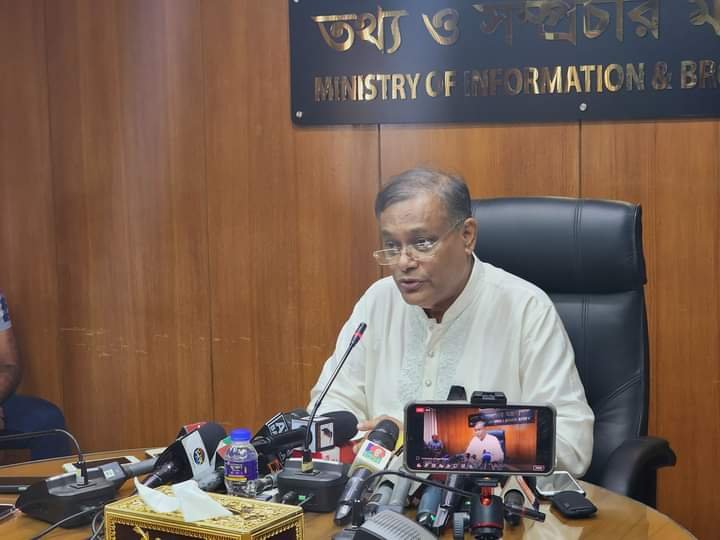 DHAKA, Aug 8, 2022 (BSS) - Information and Broadcasting Minister Dr Hasan Mahmud today said the government increased fuel price due to worldwide crisis and the price will be adjusted again in the country if its price goes down in the world market.

"The fuel cost increased by 70 percent to 100 percent across the globe due to the Ukraine-Russia war. But, the government of Bangabandhu's daughter Prime Minister Sheikh Hasina didn't increase the fuel price last year and gave Taka 53,000 crore subsidy in energy and power sectors in 2021-22 fiscal. But, it is not possible for any country to provide subsidies continuously," he said.

The minister added: "The BPC incurred a loss of Taka 8,000 crore, that means about Taka 100 crore in every day in the last three months. In this perspective, the price of fuel increased a few days ago."

Hasan told reporters at the meeting room of his ministry at Secretariat in the capital.

In his speech, the minister paid a rich tribute to Bangamata Sheikh Fazilatunnesa Mujib on her 92nd birth anniversary.

He said Bangamata was not only wife of Bangabandhu but also a fellow-fighter. She had played an outstanding role at all sectors including independence movement, freedom struggle and the Liberation War and especially she didn't compromise when Bangabandhu was in captivity during the entire time of the Liberation War, the minister added.

He said, "I'm paying a rich tribute to her."

The government is providing subsidy on fuel despite increasing its price, he added.

He said many European countries have taken steps due to the fuel crisis. Even, Germany has taken steps of saving energy due to its crisis and they have stopped street lights on different roads and stopped hot water supply in bathrooms, said Hasan, also Awami League joint general secretary.

He said Germany has already taken steps to save 20 percent energy. Restrictions are given on running air conditioners in public places and shopping malls in France from July 27 to save energy. Even, they have even declared to fine 750 Euros in case of violation of the order, he added.

Hasan said Greece has declared to save 10 percent energy by this year and gave directives to keep the temperature of air conditioners by 27 degrees in the summer. Italy has also taken steps to save power including switching off lights in public places, parks and shopping malls, the minister added.

The minister said Hungary has declared an 'energy emergency' due to the power crisis. SMSs were given to everyone in the USA to save power and energy, he added.

The minister said the incumbent government increased fuel prices due to the global crisis.

He said, "China is our friendly country and our major development partner. A friendly country can give any proposal. Our foreign policy is 'friendship to all, malice to none'. India-Bangladesh relations will not be affected by the relations of any other country. The relationship between Bangladesh and India is inseparable."

Replying to another query, Hasan said BNP is shouting for a long time.